DD Oh-No! Understanding the Many Forms of DDoS Attacks

DD Oh-No! Understanding the Many Forms of DDoS Attacks

Adam seemed nonplussed. “Ok, I’ll check right now. I’m sure it’s just increased traffic and I can fix it easily. Don’t worry, boss!” But by the time Janet arrived at the office, Adam had discovered that the problem was far bigger than he’d predicted. “It’s a denial of service. Someone is attacking us, and I don’t know what to do to stop it.”

It was the busiest shopping day of the year and their entire e-commerce operation was dead in the water. 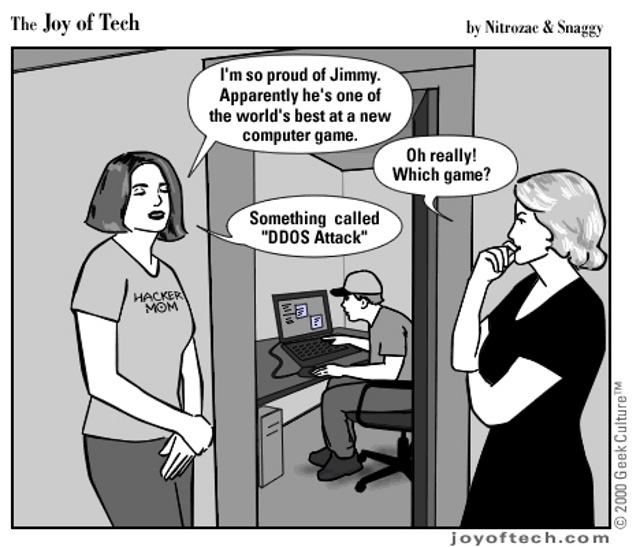 DDoS is serious business and can cripple a network.
Image courtesy of The Joy of Tech

A denial of service attack, or “DoS” attack, occurs when an outside party disrupts a network’s ability to process valid requests. This can mean a barrage of web traffic or manipulative data transfers that confuse and inhibit the network’s capability. DoS attacks are common and can last up to weeks on end. Even scarier, setting off a DoS attack can be inexpensive; attacks that last a week can be put into service for less than $150 on the black market. Every network or website is a potential target and if left unprotected, the administrator is essentially at the mercy of the attacker.

Denial of Service attacks typically take one of four forms:

In the coming days we will be examining proper detection techniques and best practices for fighting DDoS attacks. From prevention techniques to what you can do if your network comes under attack, you will learn tools and tips designed to keep your network safe. In the meantime, it’s important to understand that your network and website are vulnerable to DoS attacks and if you’re unprepared like Janet in the example above, your entire organization may be at risk. Click here to learn more about how Mosaic NetworX can help you fight off would-be attackers.